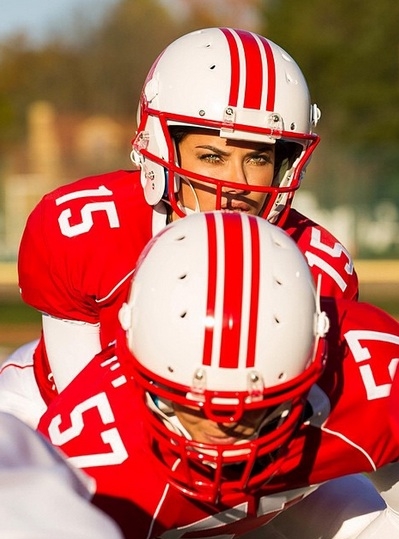 If you missed the annual Super Bowl game yesterday then you want to be sure you didn’t miss the official Victoria’s Secret and Carls Jr. ads for the sporting event. They sure sent fans into a frenzy!

Releasing their first Super Bowl commercial in nearly a decade, Victoria’s Secret has steered clear of football themes and taken a turn for the romantic, with its official Super Bowl ad; after all, February is all about getting in the mood for love ahead of Valentine’s Day. Casting Angels Candice Swanepoel, Lily Aldridge, Karlie Kloss, Behati Prinsloo, Alessandra Ambrosio and Adriana Lima in the 30 second commercial, football fans and VS fans alike shared some mutual appreciation.

Their teaser, however, was football themed! Check it out…

And then there was Carl’s Jr….

Meanwhile, Carl’s Jr. put their best foot forward with new burger babe, Charlotte McKinney, who stars in their All-Natural “Too Hot For TV” Commercial. The 21-year-old model appears half-naked in the clip as she strolls through a farmer’s market promoting the fast-food chain’s new “all-natural,” grass-fed-beef burger.