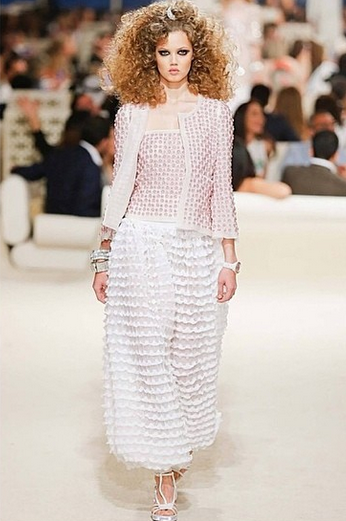 Sandwiched between winter and spring are the cruise collections, offering holiday-goers a vacation wardrobe that differs from the normal seasonal trends — and the Cannes red carpet attendees have already snapped up some pieces within just a few days of the shows!

This year, Dior headed to Brooklyn to showcase its Cruise 2015 collection. In keeping with the painterly vibe of Dior’s Fall 2014-15 show, designer Raf Simons created a modernist chic collection of 66 looks that were rich in fluid shapes and hand-painted silk scarves. Jennifer Lawrence has already been seen wearing one of the looks at Cannes. See if you can find it in the show below:

As the world gears up for the Monaco Grand Prix, so has Louis Vuitton! Designer Nicolas Ghesquiere, presented his second collection for the French fashion house at Monaco’s Royal Palace, which was inspired by the pretty and the playful: mismatching colors, oversized embellishments and contrasting soft fabrics with severe accessories.

The Dubai desert was the setting for Chanel’s Cruise 2015 collection, inspired by the East. The lookbook was replete with symbolic references. Karl Lagerfeld described the collection as his “idea of a romantic, modern Orient, a new One Thousand and One Nights.”

Which Cruise collection would you wear