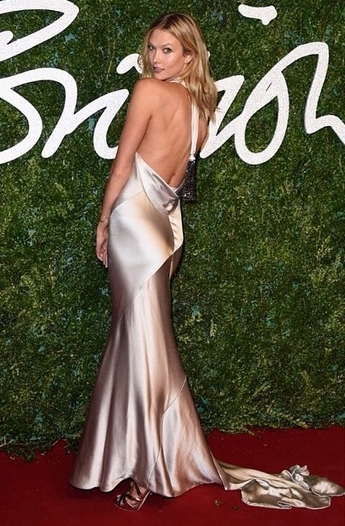 As if their schedule wasn’t busy enough, Angel Karlie Kloss and VS models Joan Smalls and Lily Donaldson still managed to squeeze in a glamorous red carpet appearance before the Victoria’s Secret Show in London!

She had her mascara done in the back of the car on the way to the 2014 British Fashion Awards and still managed to make it to the “best dressed” list in a slinky, backless silk gown.

But Karlie wasn’t the only Victoria’s Secret model to make it the the awards ceremony on time. Joan Smalls arrived in a figure-hugging Tom Ford little black dress, while representing Team GB, model Lily Donaldson came wearing her million dollar smile as she sashayed through the paparazzi.

And just one day later, the hour is finally upon us… the Victoria’s Secret Show 2014, will take place TODAY at London’s Earls Court, and FashionTV will be behind the scenes bringing you all of the sexy scoop first! Hear what Angels Adriana Lima and Alessandra Ambrosio had to say at yesterday’s Victoria’s Secret Bond Street flagship store exclusive, only with FashionTV.

Stay tuned all week for the Victoria’s Secret Show highlights!